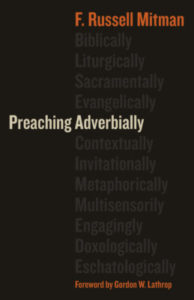 1. What led you to write Preaching Adverbally?

Decades ago I encountered a collection of essays on the shaping of sermons edited by Don Wardlaw. Its title fascinated me: Preaching Biblically (Westminster, 1983). Its subtitle, “Creating Sermons in the Shape of Scripture,” inspired my book, Worship in the Shape of Scripture (The Pilgrim Press, 2001, 2009) . My question became, “How can the entire worship event be shaped by Scripture?” I coined the phrase, “organic liturgy,” in my understanding that sermon and liturgy organically arise out of the shapes and forms inherent in the Scriptures themselves and that the whole worship service aims, through the Holy Spirit, at becoming an event of the Word of God. In other words, all the individual parts as an integrated whole seek to preach, to gospel (as a verb) and to invite an assembly to be immersed in the splendor and mystery of God.

Nearly ten years ago Wardlaw’s adverb, “biblically,” kept rumbling through my mind and enticed me to explore additional adverbs for what I believe happens when preaching becomes more than sermons. This collection of chapters is the result of my restless passion for and practice of preaching. They can be explored separately, but I invite the reader to follow what I believe is a natural progression.

Frequently those who are being trained for leadership in the church receive academic degrees without serious engagement in homiletical and liturgical praxis. Sometimes, a minimal requirement may be a semester focused on preaching as an academic subject. In my many years as pastor and overseerer of ministers and congregations, I personally tried, by invitation and persuasion, to teach leaders in what amounted to remedial seminars in worship arts and practice. Often the feed-back was, “I wish they had taught me this in seminary.” What I have had published, including this book, are my attempts to entice the curious to take another look at how we may gospel in these days. Interestingly my 28-year-old barber who probably might fit in the pews of the spiritual-but-not-religious said, “I want a copy of your book.” I gave him one.

2. If you could describe your book in 10 words of less, what would those words be?

Preaching is more than sermonizing. The whole worship event preaches.

3. What makes your book a unique contribution?

Many books on preaching–mostly focused on sermonizing–are titled with adjectives such as “biblical,” “expository,” “narrative,” and others that turn “preaching” into a noun, a “thing” that can be described or categorized. My attempt in Preaching Adverbally is to free preaching to be a verb, an action, that is not the private practice of the pulpiteer but involves the whole assembly in the “doing” of worshiping God. Grammatically adjectives modify nouns or pronouns and thereby circumscribe the “thing,” such as “the big, red ball.” Adverbs, on the other hand, generally modify verbs, end usually in “–ly’s” and describe how an action takes place, such as “she painted carefully.” Homiletics and liturgics–married arts, I believe--are engaged in preaching as a collage of interrelated actions aiming at gospeling what God is saying in the midst of an assembly in a particular slice of time and place. And, the “how’s” of gospeling I have attempted to capture in eleven adverbs, eleven “-ly’s.”

4. Which book (besides the Bible if that’s what comes to mind) has done the most to make you who you are today?

In the select bibliography I have listed more than a hundred books and articles that over a half century have shaped my understandings of the homiletical and liturgical arts. Identifying which book has been most formational for me is difficult. The one that I have cited consistently across the years, and in this book, is Word and Faith by the late Gerhard Ebeling, Professor at the Universities of Tübingen in Germany and Zürich in Switzerland. Shortly after the book was published in English by Fortress Press in the USA and SCM Press in Great Britain in 1963, Professor Ebeling was Visiting Professor at Drew University where he introduced me to biblical hermeneutics. I started underlining in Word and Faith, “Whatever precise theological definition may be given to the concept of the Word of God, at all events it points us to something that happens (Geschenen in German, “event” in English). . . .” The hermeneutic involved in both the homiletical and liturgical arts, I discovered, involves, in Ebeling’s words, “letting the text become God’s Word again.” (pp. 311, 329)

5. What are you doing when you are not writing or preaching?

“Retirement” is not a word in my vocabulary! Preaching–including crafting and presiding in liturgy–are my passions that keep opening the future to me. My son looked at the photo in my college yearbook many years ago and commented, “Gee, Dad, you looked like a nerd!” Well, I am, especially a language nerd. I am both fascinated and sometimes chagrined by what words do. I am an unconverted “ecumaniac,” and I enjoy being involved with ecumenical groups and foundations involved in worship renewal. I have sung for nearly 25 years with the choir in a local college. I enjoy the opportunities to mentor students in formation for ordination and to consult with congregations on liturgy and sacred space. My wife Ruth and I have many friends across the USA and in Europe whom we enjoy visiting and having in our home. Our two grandchildren and their parents live only seven miles from us. So, we enjoy each other’s company regularly. I enjoy cooking, especially ethnic dishes. When the gift of athletic interest and ability was handed out, I was absent. A colleague of mine suggested instead, “No, Russ, you were practicing the piano!”

Rev. Russ Mitman has served as Pastor of Parkside UCC in Phoenixville, PA, since March, 2011. He is a graduate of Franklin and Marshall College and holds a Master of Divinity degree from Drew University, a Master of Theology degree from Princeton Theological Seminary, and a Doctor of Ministry degree from Chicago Theological Seminary. Prior to coming to Parkside, he served congregations in Easton and Carlisle, Pennsylvania, and Colorado Springs, Colorado. From 1993 to 2010 he was the Conference Minister for Pennsylvania Southeast Conference of the United Church of Christ.