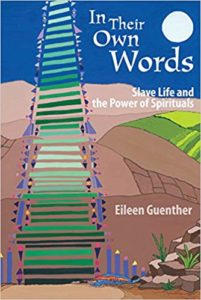 In Their Own Words is a very good introduction to the everyday life of enslaved persons in the United States as recorded in the songs, testimonies and memoirs of enslaved persons or formerly enslaved persons and the words of those who witnessed their plight or commented upon them. The narrative is supplemented by a few drawings and photos from the slave period and post dating the slave period. The book uses the familiar canon of scholarship. What is new is the format. About half of the text consists of quotations and song lyrics reﬂecting the desire of the author to use as many actual words of the enslaved as possible.

The book covers spirituals, gospel songs and hymns composed and/or sung by the enslaved and their descendants including a section on characteristics of the music and singing styles utilized. The songs that the author examines include spirituals composed in slave communities (“Roll Jordan Roll”), songs that enslaved people sang that had origins elsewhere (“Amazing Grace”), and gospel songs that post date slavery (“Give Me that Old Time Religion”). Other sections of the book include content on the history of slavery in the Americas, religion (especially Christianity. There is little on Islam or traditional religions though references are made to the latter), life in the slave quarters, women, children, the elderly, families, work, being sold, control of slaves, rebellions, escape and spirituals after the Civil War. In one chapter, the author juxtaposes spirituals and testimonies in an affecting way. They were not necessarily historically connected but they were connected in sentiment and experience. For example, the spiritual “I Got A Robe” is paired with statements made by formerly enslaved people about the lack of adequate clothing. Needless to say, the emphasis in each chapter is on the worst conditions under which the enslaved lived.

A word of caution- although the author points to the spirituals, autobiographies, interviews as “their own words,” as she herself notes, many of these were transmitted through other people. The earliest spirituals, the only ones actually from the slave period, for example, were collected and published by European Americans. European Americans chose the songs to include or leave out. Obviously, they only heard songs that African Americans wanted them to hear. It has been noted by other scholars that relatively few work songs (“Michael, Row the Boat Ashore”) or secular songs were preserved. Two of the three European-American authors of Slave Songs of the United States, the earliest collection had no musical training. They lacked technical language to describe what was happening musically. “Autobiographies” of slaves or memoirs were often written or shaped by abolitionists who were less interested in the enslaved as human beings than in the cause of setting them free. At best the spirituals, memories and other accounts provide a partial glimpse into the life of the enslaved persons. But still, they are rich resources, for knowledge about a period that is thankfully past.