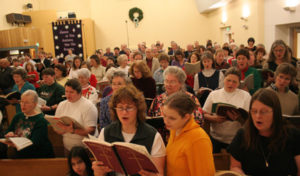 Martin Luther praised God’s “excellent gift of music [which] has been instilled and implanted in all creatures,” then explained that “when musical learning is added . . . which refines the natural music. . . there is nothing more amazing in this world. . . [N]ext to the Word of God, music deserves the highest praise.”[1] Karl Barth said that the church sings “from inner, material necessity.”[2]

The importance of music to which Luther and Barth point not only characterizes Reformed and Lutheran parts of the church. The Second Vatican Council described “full, conscious, and active participation [as] demanded by the nature of the liturgy [and], by reason of baptism, the right and duty of the Christian people,” then said that this participation is both internal and external, and that the external includes singing.[3] Singing is intrinsic to worship in the Orthodox church. As in the medieval West, it has often been “done by the choir,” recently, however, with the ancient practice of congregational singing being revived.[4]

John Mason Neale saw the Anglican heritage as “chanting of the psalms, canticles, and responses, by the people; the anthem sung by the choir,—and the metrical hymns, . . . completing the whole.”[5] Carlton Young reported that Wesleyan hymns “were sung by divergent people in varying levels of theological understanding in a variety of religious, social, and economic settings,” then quoted Ivor Jones that “‘they were intended to take folk from their youngest days to their death bed.’”[6] David Music and Paul Richardson said that “Baptists have long been known for their love of congregational singing and the enthusiasm with which they have engaged in it.”[7] Even Zwinglians and Quakers who sought silence with no music at all have not been able to stop their worshiping assemblies from singing.

Singing grows out of the church’s praise, prayer, lament, and story—in community. The church is not individuals or tribes. It is a community of forgiven sinners who in joy and sorrow discover new life in Christ. The new song—“new every morning,” as Dietrich Bonhoeffer reminded us,[8] whether composed yesterday or centuries ago—reflects what Paul told the Galatians, that we are one in Christ with no distinctions according to race, status, or gender.[9]

Paul knew the corollary of this oneness, that there are varieties of gifts but the same God who activates all of them in everyone for the common good.[10] Musicians are called to care for the musical common good, the church’s song. It is not their song, as Bonhoeffer reminds us. “It is the voice of the Church that is heard in singing together. . . I may share in its song.”[11] This clarifies the musician’s calling to “refine” music’s raw material of sound to make singing together possible—which happens through human effort and learning. What will be sung? By whom? With organs and other instruments? What skills, theological understandings, study, and practice do musicians need to do this work?

In this context musicians emerge, learn, and develop in the church in many ways. People of all ages, including children, have served in musical roles. Musical leadership has been shared by singers, organists, choir directors, and others. Some musicians have been amateurs, some professionals, some paid, some not. Congregational singing has been led well and led poorly. Choirs have reached the highest human levels of perfection and have been the butt of jokes. Many titles have been used for musicians—among them singer, cantor, precentor, organist, choir director, and song leader. Calls have been expressed or not. Musicians have been installed or not.

Since this landscape is so multi-faceted, attempts have been made to affirm musical vocations by defining them through other vocations, like ordination for pastors or consecration for deacons, with no musical reference. This denies the church musician’s “high and holy calling,”[12] however it emerges. The whole church suffers when this happens. The call of musicians as musicians needs to be affirmed. Erik Routley saw the problem. He said, “To lay hands on the musician in ordination would . . . be an excuse for doing no more. No, don’t lay hands on musicians. Talk to them.”[13] Understand their vocation.

Vocations in the gathered church at worship form a three-legged stool. 1) The pastor is called to preside and preach. 2) The musician is called to lead the church’s song. 3) The people are called to sing together and then to go to their vocations in the world. Teaching, pastoral, and administrative duties grow from all of these. Deacons—and those with gifts of diaconal service without the title—bridge the church gathered and scattered.

Church musicians have to be attuned to all of these vocations. Through their musical vocation they work with pastors by planning before worship and coordination at worship. They may work with deacons in similar ways, but especially with diaconal bridging between the community gathered and sent. Work with the gathered community that sings involves careful listening to and learning about a particular set of lawyers, truck drivers, family members, their mixes, whatever, in its local configuration and in connection with the Biblical song and that of the whole church catholic across time and space. It means knowing the Psalms, the womb of the church’s music, and what they teach us: to praise God and then go where praise leads in care for the neighbor.

The vocation of church musicians takes hours of musical study and practice, but that is not the whole vocation. Making it the whole misuses the church for performance purposes and  denies the nature of the church as well as the musician’s vocation in it. Church musicians are called to use their musical gift with the people they serve. That requires listening to, contact with, and learning from people in their communities, in light of the fullness of the church’s song. Musicians learn in classrooms, practice studios, and contexts what Colossians 3:16 teaches us, that church music is for the glory of God and the good of the neighbor, and that this is not a theory but takes flesh among actual people who sing and work.

The church musician leads two groups. One is the assembly, made up of all sorts and conditions of people—old, young, rich, poor, with and without musical training or skills, who hear well or poorly, monotones, everybody. Around Word, Font, and Table, without practice, the assembly sings what the human race as a whole can sing, namely, unison and unaccompanied folk song. It may be accompanied by the organ or other instruments, and some assemblies may break into parts; but the intrinsic folk-like nature of the people’s song has to be respected.

The other group is choral. It joins the assembly around Word, Font, and Table, but it prepares with practice. It both leads the assembly and sings what the assembly cannot sing. What the choir sings by itself may be simple or complex as long as it is possible for the singers. Both it and the assembly’s song have to be fitting for worship. Our legalistic battles about style are largely irrelevant. The question is what fits worship’s flow in a local and a catholic sense.    The musician learns about this in an extensive discipline of study and practice that needs the support of the church.

That the church has supported church musicians with the needed biblical, liturgical, theological, and musical resources is clear in schools and curricula, in the huge and remarkable repertoire of music that has been composed, and in wonderful relationships among clergy, musicians, and congregations which have developed in the gathered church and helped it move constructively to its work in the world. These relationships have been nurtured especially well in seminaries where future clergy learn about music and worship alongside musicians.

Unfortunately the church has not always provided the needed support. It has sometimes treated music and musicians as ancillary appendages for self-serving ends, collapsing music into the culture’s grasp as entertainment and a manipulative sales tool controlled by numbers and the market as god. It has omitted music from the theological dialogue and from seminary curricula. Baptists, Presbyterians, and Lutherans have abandoned fine seminary programs for musicians. Clergy and musicians have been trained separately, sometimes with malice toward one another. Musicians have been treated badly in churches. David Tiede, Emeritus President of Luther Seminary in St. Paul, Minnesota, sees music as caught in the tectonic institutional shifts of our period.

Tectonic shifts spawn new initiatives. Charlotte Kroeker saw that worship and music had been left out of seminary education and started the Church Music Institute. Others see what they may have missed. Barriers can fall, blinders can be removed, and the landscape in a new perspective can lead to new vision and purpose.

Challenges to seminaries and deaths of some of them have created a new awareness with new possibilities. Institutions die; new ones arise. Christ did not promise one institutional embodiment when he promised to be with the church to the end of time. We can seize Christ’s promise without being wedded to particular institutional forms, trusting the Holy Spirit.

Some seminaries, colleges, and universities still provide resources, degrees, and curricula for the study and practice of church music. They and new initiatives merit our support, especially if clergy and musicians can learn together. Schools that have abandoned church music are not likely to help. We should wish them well, hope they can provide whatever support they may be able to give, realizing that the Holy Spirit can surprise us. Fundamentally we need to support old and new places where the song of the church will be practiced and studied in all of its duty and delight.

Pope Francis provides wise advice in his encyclical Laudato Si’. Named from stanzas of Francis of Assisi’s canticle, best-known in English as “All Creatures of our God and King,” it reminds us that the earth “cries out to us because of the harm we have inflicted on her.”[14] If we do not deal more constructively with our abuse very soon, the institutional shifts we face may become irrelevant. Francis understands, however, that we will need musicians with their study and practice, no matter what happens. He invites us to the journey, “to take charge of this home which has been entrusted to us, knowing that all the good which exists here will be taken up into the heavenly feast.” Then he says, “Let us sing as we go.”[15]

Paul Westermeyer is Emeritus Professor of Church Music at Luther Seminary in St. Paul, Minnesota, where he taught, served as the Cantor, and directed the Master of Sacred Music degree program with St. Olaf College in Northfield, Minnesota. Westermeyer's publications relate to his lifelong interest in theological, musical, and liturgical intersections. The Church Musician weaves some of these concerns together in a perspective on the role and vocation of the church musician; With Tongues of Fire surveys some twentieth century hymnody and hymn writers; Let Justice Sing analyzes hymnody and justice; Te Deum scans church music from the Old Testament to the present; and the Hymnal Companion to Evangelical Lutheran Worship discusses each hymn and tune in the hymnal. Westermeyer serves on the Board of Directors for Church Music Institute.

[7] David W. Music and Paul A. Richardson, I Will Sing the Wondrous Story: A History of Baptist Hymnody in North America (Macon: Mercer, 2008). p. xi.

[12] The Association of Lutheran Church Musicians, “The Role of the Cantor.”