Summer 2019 brings multiple opportunities for Church Music Institute event attendees to build leadership skills by working with clinicians who trace their legacy back to J.S. Bach.  Paul Westermeyer and David Cherwien, for example, come out of such a tradition as did the Paul Manz family who originated in Germany with Bach roots.  Other clinicians for this summer are influenced by Episcopalian musician and composer Paul Lindsley Thomas.  What will your legacy be?  How can these luminaries shape your life and vocation?

Have you ever sung “E’en So Lord Jesus Quickly Come” by Paul Manz or “Shout the Glad Tidings” by Paul Lindsley Thomas?  If so, you join throngs of singers, with the Manz anthem selling 1.5 million copies and the Thomas anthem, at least a half million.  If still alive, Paul Manz would be 100 on May 10, 2019, and Paul Lindsley Thomas is very much alive at 90 as of March 18, 2019.  The music and legacy of these two church musicians continue unabated through their music and people they touched.  Both musicians thought and lived far beyond their ecclesiastical boundaries to embrace a theology and practice of church music that was broadly ecumenical.  They were not only excellent musicians but also faithful theologians transmitting the Gospel to the people they loved, parishioners in the churches they served, year after year.  What can we learn from Paul Manz, in particular, whose 100th birth year we celebrate in 2019? 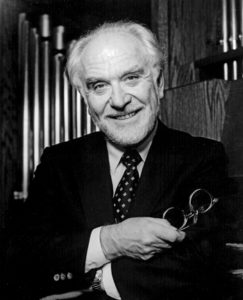 Though a newsletter article cannot do justice to the rich life of Paul Manz,[1] we can trace a pattern of personal and professional development that gives insight to his long and effective service.

Identity in a Strong Family, Faith and Musical Tradition

The family of Paul Manz traced their origins to the Mainz area of Germany and numerous musicians dot the family tree.  Paul was born an only child to immigrants Hulda and Otto Manz in Cleveland, Ohio, where his parents sang German chorales as duets.  His father built and maintained organs, including building a small reed organ for his son, Paul.  Paul’s parents and others who saw his musical talent made sure his education included the best possible teachers (insisting on a strong piano foundation before studying organ) and schools.  Family, church, and musical mentors surrounded Paul, people he never forgot despite moving into more and more sophisticated musical circles.[2]

Formal Education that Continued into Mid-Adulthood

Paul Manz’s formal education included [then] Concordia Teacher’s College, The American Conservatory in Chicago, Northwestern University, and, later, a Fulbright grant to study with major composers and explore original organs in Europe.  The latter, after he had begun his career, nourished his intellectual development, performing, and compositional career in substantial ways.  His education was not without obstacles, as he pursued knowledge and opportunities that opened to him.  Certainly the time in Europe was eye-opening, and made him question earlier assumptions.  Yet, he assimilated new ideas while maintaining appreciation for earlier training and people who had been important in shaping him musically.[3]

Trouble in the Temple

Manz’s vocation in the church, affiliation with denominational schools, seminaries, and Lutheran bodies unavoidably intersected with conflicts in those institutions.  His personal callings, gifts, and responsibility to a growing family (three children of his own and four adopted children) were threatened by outside forces beyond his control.  His growing importance as a musician, performer, composer, and spokesperson for the faith through music made him a pawn in political battles not of his choosing.  These were hard times, when character was tested and built.  An identity formed earlier was important to decisions he had to make.[4]

Service to the Church and People

From the time he was a young piano student and began to study organ, Paul Manz served the church, becoming a “spur of the moment” substitute organist at St. Matthew Lutheran Church in Cleveland where his family attended.[5]  His vocation of church music began there and continued through his life, inspiring hymn festivals, a desire to continue learning, encouragement for the church to invest in a new organ, publication of chorale preludes he heretofore had improvised, acceptance of a new position when others may have retired.  When asked what advice he might give to those starting in his field, he said, “Love the people you have been called to serve.”[6]

A Sense of Humor

In 1985, Rev. Dr. David Krause, a close friend and colleague of Paul Manz, decided Paul Manz would be a good candidate for presiding bishop of the soon-to-be Evangelical Lutheran Church of America.  Why not a musician?  After all, Luther said,

"I have always loved music. Those who have mastered this art are made of good stuff, they are fit for any task. It is necessary indeed that music be taught in the schools. A teacher must be able to sing; otherwise I will not look at him. Also, we should not ordain young men into the ministry, unless they have become well acquainted with music in the schools."[7]

So Dr. Krause penned the attached piece, walked down the hall to share it with Paul.  Manz, who read it, gave a sly grin and said, “You forgot something.”  Manz wanted the word “crescendo” added.  Years later, when asked what Paul had done with the framed version, he said, “It’s hanging in my bathroom.”

“Paul Manz’s music is always innovative, fresh, and creative.  I have depended on his music for years for just the right piece for the right spot in the service.”[8]

“During the last three decades of the 20th century, hymn preludes published by Paul Manz were the mainstay of a well- trained church organist’s repertoire.  The outstanding composers of church organ music we enjoy today in large numbers did not exist.  Not only did Manz’s music win by default from little competition, but, fortunately for organists and congregations, his music happened to be composed on the highest level, outstandingly crafted on North German Baroque compositional techniques and based on theologically sound hymns and accompanying tunes.  Those of us who weren’t in Lutheran congregations were eager to introduce these hymn preludes into our services because they sounded fresh, original, inspired, and, most of all, believably connected with the text represented in the musical setting.  It wasn’t just music to plug into a church service, it was beautiful liturgical music intended for a specific purpose in worship as all church music should be.”

“As I have written, the significance of Paul Manz is that he breathed new life into hymn singing which in turn affected the rest of worship, influenced all the music used there, and gave organists insights into their craft. Unlike what musicians are often taught in our bifurcated systems, Manz knew that hymns are music and that congregations deserve to be treated musically. He understood the nature of the church’s song. As he said, its melody is about the love of God and its harmony about “the first being last, the greatest being least, and the kingdom composed of children.” In the face of his ability and skill, one could easily give up. He taught us, however, that we are not all required to do what he did, but are called to do what we each can do with our gifts for the glory of God and the good of the neighbor. We owe him our deepest gratitude.”

So what will your legacy be?  Might Paul Manz, servant of the church, and others influence your life, perhaps even through a CMI course, workshop, or hymn festival this summer?

In preparation for Easter day hymns, I noted how enduring the tunes for the day have been. EASTER HYMN from 1708, GELOBT SEI GOTT from the 1500’s, O FILI ET FILIAE from 1625, to name only a few.  The texts have changed over the years but the tunes remain singable, memorable, and reliable vehicles for expressing the joy of Resurrection morning.  In a world of conflict and disagreement, music serves communities of faith to express what we hold in common.  Indeed, as the Mennonite church musician Mary Oyer reminds us, when we are singing together we are not fighting with each other.  Music brings us together and empowers us to do God’s work.  Church musicians working with collaborative clergy have enabled congregations to sing communally for hundreds of years.  It can be our legacy too.

See you this summer!

[1] For overview, see obituary at www.legacy.com/obituaries/twincities/obituary.aspx?pid=135264217

[8] Nearly all of Paul Manz’s print music is available at https://www.morningstarmusic.com.