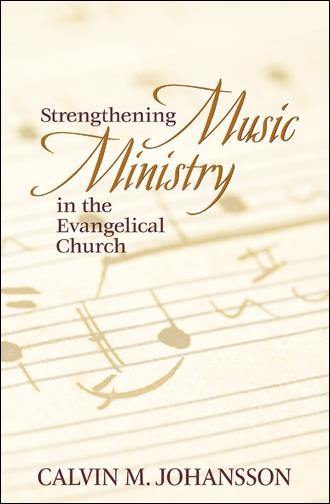 The overall premise which undergirds Strengthening Music Ministry in the Evangelical Church is the Hebrew/Christian worldview applied to every aspect of life comprehensively and consistently. Such an all-encompassing foundation of foundations impacts, by definition, the music of the church. It is an objective underpinning. It rejects subjective relativism in which all music is believed value neutral and without inherent meaning. The book’s strong point of view is that emasculating music common to relativistic aesthetic theory is unpalatable and cannot be supported by scripture. Within a given culture various musics do have a generally understood common meaning.

Although SMM addresses the narrow evangelical church and those of limited size, the sections dealing with aesthetics, culture, and theology apply equally well to all churches. A fait accompli in the evangelical community, it is to be noted that many mainline denominations are also moving little by little toward the abandonment of traditional church music in favor of the adoption of popular musical fare. Because such a move typically means the suspension of systemically hearty congregational singing, the reducing or eliminating of the choir’s role in worship, and the replacement of divine transcendence with human centricity, the book’s rebuttal and helps will be of interest to readers of all religious persuasions and every congregation regardless of size.

The first four chapters are concerned with church music practics. These sections aim to provide practical ideas and helps for the building up and strengthening of music ministry in the assembly. Special attention is given to the imperative of congregational song in worship and the musical and ministerial role of the choir. Assistance in procuring choir materials and suggestions for advancing congregational song are included.

Chapters five through eight address issues of contemporary culture and religious popular music. It does this through an investigation of aesthetic theory and the nature of music. Finally (chapters seven and eight) the crux of the matter is reached via theological constructs. It is scripture which ultimately must disciple the music of the church. The doctrine of creation, the creation mandate, the imago Dei, the incarnation, stewardship, law and grace, mystery and awe, music and truth are but some of the topics included in the book’s discussion.

Finally, a step by step pastoral approach to church music is given. Such nurture will foster a church music which is accommodative, yet within the parameters of scripture. Such music then becomes a musical testimony of truth in the topsy-turvy world in which we live. “Far from being neutral, music—subtly and covertly—has the power to buttress or diminish the full gospel.” (223) The pastoral musician’s responsibility is to be musically faithful to the Word.

About the Author
Consistent with his conservative holiness upbringing in Belmont Street Full Gospel Church, Worcester, Mass., Calvin M. Johansson attended Houghton College, a Wesleyan Methodist school, to pursue a degree in music. After graduating, he was appointed music director of the Post Chapel, United States Military Academy, West Point. Following his tenure he began graduate studies and subsequently earned a doctorate from the School of Church Music at Southwestern Baptist Theological Seminary in Fort Worth, Texas.

A devout, steadfast evangelical, Dr. Johansson has taught at the college and university level, served as music director for many churches, and been an astute observer and scholar in the field of church music. A compelling conference speaker and lecturer, Johansson authored the classic work on theology and church music, Music and Ministry: A Biblical Counterpoint, as well as a volume on music’s role in Christian discipleship, Discipling Music Ministry: Twenty-first Century Directions.