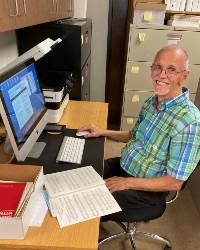 In addition to his role at CMI that combines his love of music and theology, Rev. Tom Tickner has returned to his musical roots as Choir Director at Central Presbyterian Church, Waxahachie. Tom began his career directing choirs at Adams Middle School in Alice, Texas, and New Braunfels High School for nearly 10 years, from 1972-1981. He left teaching to enter Austin Presbyterian Seminary.  Tom then served as the solo pastor at Chisholm Trail Presbyterian Church in Yukon, Okla., from 1984-2003. Tom continued his ministry with the residents of Grace Presbyterian Village in Dallas, serving as their pastor for the next 14 years until he retired in 2017. CPC welcomed Tom in early 2018.

Tom received his Bachelor’s of Musical Education from the University of Texas at Austin, his Master’s in Music with emphasis in Music Literature and Conducting from UT-San Antonio, and his Master’s in Divinity from Austin Presbyterian Theological Seminary. Tom and his wife, Susan, have two sons, Stephen, who with wife Bianca lives in New York City; and Mark, who with wife Molly resides in Austin. The Tickners have three granddaughters, with a fourth granddaughter expected in August.