Summer Workshop: “All Times and Places Praise the Lord” 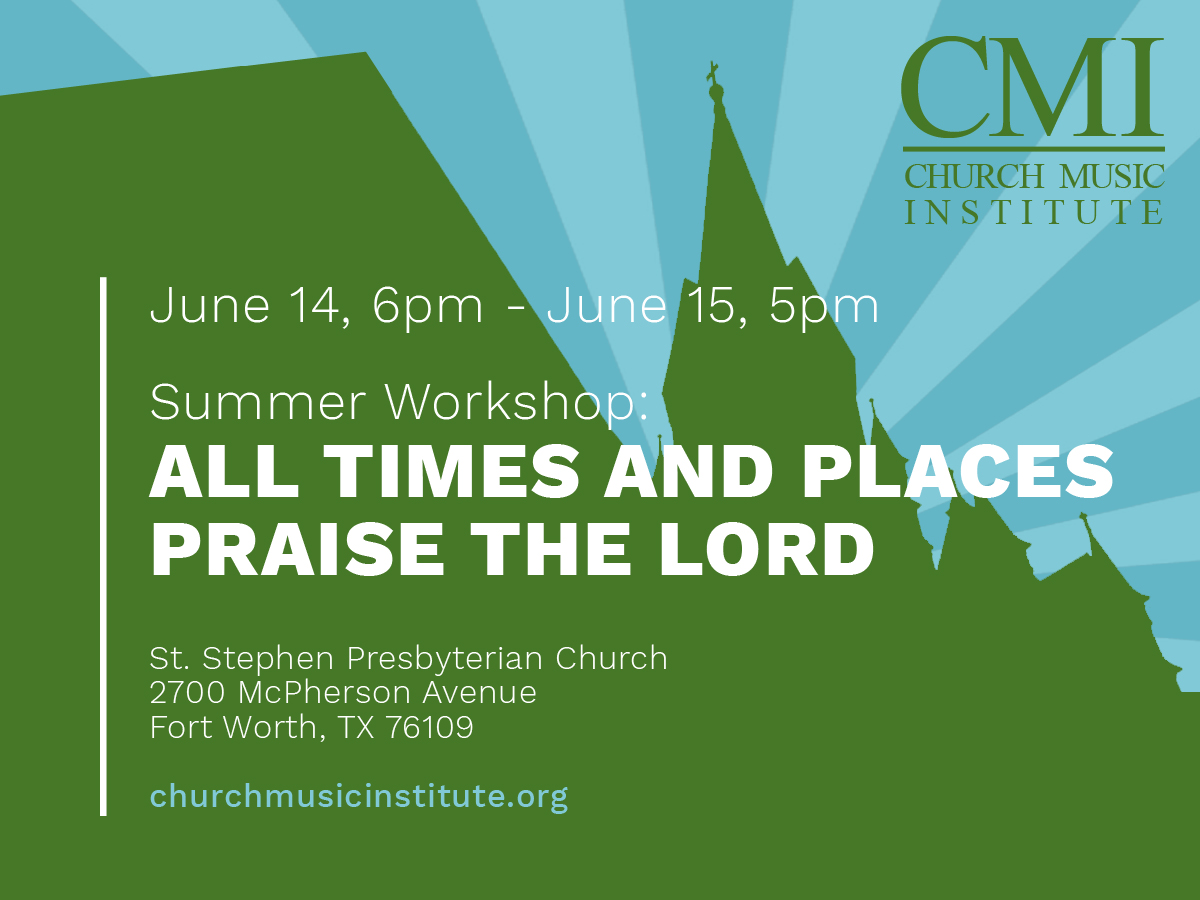 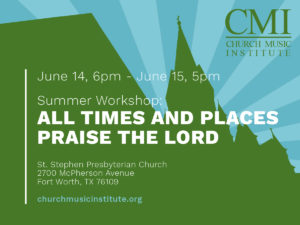 The 2019 CMI workshop will feature clinicians and presenters who will offer inspiration, edification, and practical application for all those involved in the church music endeavor. The workshop offers something for everyone, whether full-time or avocational church musicians, clergy, interested laypeople, or even church choir members who are interested in exploring more fully the music which they lead every Sunday. This workshop will focus on the song of the church as a communal task--the "work of the people"-- and the positive outcomes which can be achieved when all people work together. The two principle clinicians, Dr. David Cherwien and Rev. Paul Westermeyer, will encourage and offer participants a vision for a holy, blessed, and collaborative relationship among all of those involved in leading worship in the Church. To that end, an integral component of this workshop will be the involvement of the Lilly Scholars--teams of church musicians and clergy who, through a Lilly grant administered by CMI, are engaging in projects related to church music.

The workshop will begin on Friday, June 14, with a joyful hymn festival which will explore what it means to praise the Lord in "All Times and Places," through chant, spirituals, chorales, and choral music led by nationally-renowned organist and composer David Cherwien. The workshop on Saturday, June 15, will include plenary sessions by Cherwien as well as sectionals dedicated to the specific craft of church music, taught by top local professionals.

The hymn festival and workshop will be held at St. Stephen Presbyterian Church in Fort Worth, Texas. With its sumptuous acoustics, ample facilities and fine, four-manual Garland organ, the church offers a spectacular setting for church music at its best. 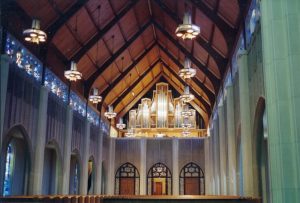 Paul Westermeyer is Emeritus Professor of Church Music at Luther Seminary in St. Paul, Minnesota, where he taught, served as the Cantor, and directed the Master of Sacred Music degree program with St. Olaf College in Northfield, Minnesota. Prior to coming to Luther Seminary he was Professor of Music at Elmhurst College, Elmhurst, Illinois, where he chaired the Music Department, directed the College Choir and oratorio chorus, and taught courses in church music, hymnody, and worship. He was Visiting Professor of Church Music at Yale University's Institute of Sacred Music; Cantor and Assistant Pastor at Ascension Lutheran Church in Riverside, Illinois; Editor of The Hymn, the quarterly journal of The Hymn Society in the United States and Canada; Dean of the Fox Valley (Illinois) Chapter of the American Guild of Organists; National Chaplain of the American Guild of Organists; Chair of Ecclesiastical Concerns for the Association of Lutheran Church Musicians; and President of the Hymn Society in the United States and Canada. He served as the musician for churches in Ohio, Illinois, Pennsylvania, New York, New Jersey, and Maryland. He is currently on the Boards of the Church Music Institute for whom he has taught courses, the Center for Church Music, and the Association for Reformed and Liturgical Worship. He has been the Dean of the Twin Cities (Minnesota) Chapter of the American Guild of Organists from 2014 until 2018.

Westermeyer is an ordained Lutheran pastor in the Evangelical Lutheran Church in America and a graduate of Elmhurst College, Lancaster Theological Seminary, the School of Sacred Music at Union Theological Seminary in New York, and the University of Chicago. He did Clinical Pastoral Experience at Lutheran General Hospital in Park Ridge, Illinois; graduate study in the Liturgical Studies Program at Notre Dame University and the Schola Cantorum at Concordia Theological Seminary in St. Louis; and independent study in the Archives and with professors of the Lutheran School of Theology at Chicago. His doctoral dissertation was completed under Martin Marty at the University of Chicago and is a theological, liturgical, hymnological, and musical comparison of the Lutheran and German Reformed churches of Pennsylvania in the nineteenth century.

Westermeyer's publications relate to his lifelong interest in theological, musical, and liturgical intersections. The Church Musician weaves some of these concerns together in a perspective on the role and vocation of the church musician; With Tongues of Fire surveys some twentieth century hymnody and hymn writers; Let Justice Sing analyzes hymnody and justice; Te Deum scans church music from the Old Testament to the present; the Hymnal Companion to Evangelical Lutheran Worship discusses each hymn and tune in the hymnal. He co-authored Church Music in the United States, 1760-1901, with David Music. His most recent books are Church Musicians: Reflections on Their Craft, Call, History, and Challenges, and A High and Holy Calling: Essays of Encouragement for the Church and Its Musicians. 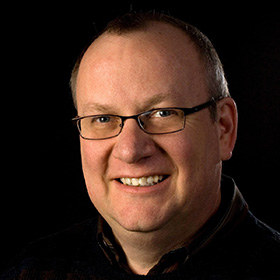 David M. Cherwien serves as Director of Music at Mt. Olive Lutheran Church, Minneapolis, MN, and in 2002 was appointed Music Director for the National Lutheran Choir, also based in the Twin Cities. He has also held full time parish music positions in the Minneapolis/St. Paul area, Chicago, Seattle, and Berlin. During the 2000-2001 academic year, he served as Organist/Cantor of Christ Chapel and Visiting Instructor of Music at Gustavus College, St. Peter, MN. While in Chicago, he served as Teaching Associate in Service Playing and improvisation at Elmhurst College. He completed the Doctor of Musical Arts degree in organ performance, and the Master of Arts degree in Theory and Composition, both from the University of Minnesota. His undergraduate work was in organ performance and music education at Augsburg College, Minneapolis, where he was honored as distinguished alumni in the fall of 2000.

Following his undergraduate work he studied for two years at the Berlin Church Music School in Berlin, Germany. There he studied improvisation with Renate Zimmermann, organ Literature with Karl Hochreither, and composition with the late Ernst Pepping. He has also studied organ with Christian Baude in Aix-en-Provence, France, and with Paul Manz, Heinrich Fleisher, and Earl Barr in this country, and is a Fellow with Melodious Accord, studying composition with Alice Parker.

He is composer of the popular series for organ, Interpretations, based on hymn tunes (Lorenz) and has published other liturgical music for choir and organ with AMSI, Abingdon, GIA, MorningStar, Concordia, Augsburg/Fortress, and Choristers Guild. He is author of the book Let the People Sing, a practical guide for those who lead the congregation in song, published in 1997 by Concordia. He has recorded two CDs of congregational hymns and organ arrangements with AMSI called Interpretations.

Dr. Cherwien has distinguished himself among American organists by his ability to play an entire church service, including prelude, postlude, liturgy, and hymns, with very little reference to printed music. In the European tradition of church organists, going back to the time of Bach and before, he composes or improvises much of the music he plays in a worship service. The music is based on the lessons and liturgy appointed for the day and even on the texts of the hymns to be sung.

Dr. Cherwien is a founding member of the Association of Lutheran Church Musicians, serving in its leadership in a variety of capacities, including National President from 1993 to 1997. He is also active in the American Guild of Organists and Choristers Guild. His workshops on church music, service playing and improvisation, and his hymn festivals and other worship leadership roles have brought him to many parts of the country.

Click here to see the detailed schedule and additional presenters.

***For any group registrations of 3 or more from the same church, deduct 15% from the total due! Please send a separate registration form for each person. On-Site Registration will be available. Lunch and music packets cannot be guaranteed after June 5. Student Scholarships Available. Please contact CMI for information.